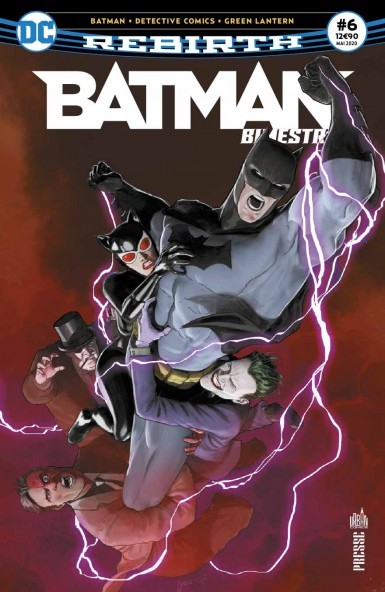 Batman #1
Batman Vol. 1 (1940 - 2011)
The Legend of the Batman: Who He Is and How He Came To Be - One night, while walking home from the theater, the Wayne family is robbed at gunpoint. When Thomas Wayne tries to intervene, he's shot in the chest. To stop her wailing, the criminal shoots...

Batman #159
Batman Vol. 1 (1940 - 2011)
"The Great Clayface-Joker Feud!" Featuring Batman, Batwoman, Robin and Bat-Girl! The Joker and Clayface go on a contest of crime--and only the Bat-Family can stop them. Plus, the imaginary tale "The Boyhood of Bruce Wayne Jr.!"'...

Batman #251
Batman Vol. 1 (1940 - 2011)
The Clown Prince of Crime is back in Gotham City, and he's going to make everyone pay in this classic story by the legendary creative team of Denny O'Neil and Neal Adams!

Batman #321
Batman Vol. 1 (1940 - 2011)
Upon entering Gotham Police headquarters Commissioner Gordon is handed an envelope containing an invitation to the Jokers birthday party. As he tosses away the invitation the whole lobby begins to laugh hysterically as the Joker enters the room. Outside...

Batman #614
Batman Vol. 1 (1940 - 2011)
HUSH, CHAPTER 7: THE JOKE Batman takes on the villain you've been waiting for: The Joker! One is the Dark Knight…the other is The Clown Prince of Crime. Batman's oldest foe finally has gone too far, and Batman makes a vow: "Tonight,...

Detective Comics #168
Detective Comics Vol. 1 (1937 - 2011)
Batman is tracking down a ten year old case with the help of some class mates. That's right; Batman is teaching a course on criminology. There are many clues indicating who has done the old crimes, such as a lock of green hair is found and who else...

Detective Comics #475
Detective Comics Vol. 1 (1937 - 2011)
The night following Deadshot’s capture at ’s Exhibition Hall, The Batman visits Silver St. Cloud in her apartment thinking she has something to say to him. Even though she is startled, she...

Detective Comics #826
Detective Comics Vol. 1 (1937 - 2011)
SLAYRIDE Series writer Paul Dini returns as an unexpected twist of fate places Robin directly in the clutches of Batman's archenemy, the Joker! Alone and incapacitated, Robin must summon every bit of his courage and ingenuity to free himself before...

Detective Comics #1
Detective Comics Vol. 2 (2011 - 2016)
DETECTIVE COMICS DC’s flagship title is relaunched for the first time ever, with new Batman adventures from acclaimed writer/artist Tony S. Daniel! A killer called The Gotham Ripper is on the loose on Batman’s home turf—leading the...

Gotham Central #15
Gotham Central (2003 - 2006)
SOFT TARGETS, PART 4 OF 4 It's the conclusion of The Joker's sniper spree...and it won't be pretty! The Joker is in custody. Is this just another part of his game with Batman, with the detectives of the GCPD caught in the middle? Just how...